Brooke Youngquist Sweat starred as a member of the FGCU volleyball team from 2004-07 and has since become one of the world's best beach volleyball players capping her development on the sand by appearing in the 2016 Rio Olympics.

Youngquist Sweat is a four-time reigning  AVP Defensive Player of the Year (2013, 2014, 2016, 2017) and a member of one of just two USA beach volleyball pairs in the 2016 summer Olympics in Rio. She is a 10-time worldwide winner and has more than 30 podium finishes (top three) across multiple professional tours. She finished 2017 ranked seventh in the world and is a three-time winner of AVP Tour Championships. She had a career-best FIVB World Tour finish of second in 2017, and she played in four AVP Tour stops in 2017, winning one and finishing second twice. Furthermore, she recorded fifth-place finishes in both the 2015 and 2017 FIVB World Championships, and she has 20 top-five finishes on the FIVB World Tour. In 2011, she was named the Florida Region Player of the Year.

As a member of FGCU's indoor team, Youngquist Sweat compiled 1,173 kills, 1,369 digs, 100 aces and 50 double-doubles in her career. Her kill total stood as the most in program history until 2017 when Amanda Carroll broke the record, but her kill and ace totals still rank second all-time in program history, while her dig total is fourth most – second most at the time of her graduation.

Youngquist Sweat was a freshman on the program's inaugural team in 2004 that went 24-6 and advanced to the NCAA Division-II South Region semifinals. As a sophomore and junior, she led the team to 27-4 and 29-3 records and back-to-back South Region runner-up finishes. As a senior, she led the program's very first Division-I team to a 23-3 record and an ASUN regular season championship. 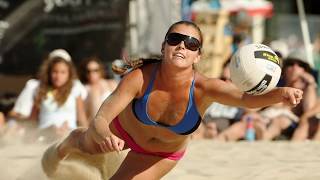