"She has represented FIU and the conference in a very elegant way on a national scale. Her record speaks for itself. She is an extraordinary woman and her dedication, hard work, competitiveness and adaptability were all key to her success."

In today’s collegiate sports environment, coaches can feel fortunate if they stay at one institution for five or more years. Not many will enjoy the type of success and longevity with one school that Cindy Russo experienced at Florida International University.

The Portsmouth, Va., native played at Old Dominion University and moved straight to the bench as an assistant following her playing career with the Lady Monarchs. In 1977, Russo moved to Miami, Fla., for her first stint with FIU. After her initial season, Russo took the Lamar head coaching job and was an instant success, going 40-22 in two seasons with the Lady Cardinals before returning to FIU in 1980, this time for good.

Russo guided the Panthers to 130 wins from 1981-87. FIU played in the NCAA Division II postseason in back-to-back years and advanced to the Second Round in 1987. However, a new challenge awaited the young coach and her blossoming program.

The Panthers joined the New South Women’s Athletic Conference (NSWAC) for the 1987-88 academic year and Russo’s squad made an immediate impact. FIU finished second in its first season, then earned the first of nine regular season titles the following year. Russo was voted NSWAC Coach of the Year following a fifth consecutive 20-win season.

Under Russo, Andrea Nagy and Albena Branzova became two of the conference’s top players and a pair of seven All-Americans that Russo coached during her tenure with the Panthers. FIU led the conference in scoring during each of Nagy’s four seasons, and the 1991-92 season began a run of seven consecutive regular season titles for Russo and FIU, an achievement that remains a conference record. Under her tutelage, Nagy became the only four-time Tournament MVP and the only women’s basketball player in league history to record 1,000 career assists. Branzova was also named Player of the Year in 1995. Russo’s teams became a dominant force in the league, while also making strides in the postseason. When the NSWAC transitioned into the Trans America Athletic Conference (TAAC), FIU won a game in the WNIT in 1992, then finished third in the 1993 WNIT postseason tournament.

The seven-time conference Coach of the Year concluded her career in the ASUN with a 250-77 mark (128-14 in NWSAC/TAAC), while finishing with 667 wins in 36 years at FIU. The Panthers posted 22 consecutive winning seasons between 1981-2003 and a total of 17 postseason appearances under Russo’s guidance. Her 707 total wins rank her 19th on the all-time Division I women’s basketball wins list. 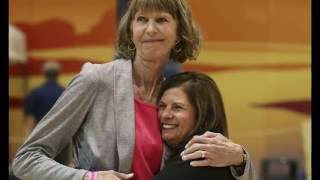 "She has represented FIU and the conference in a very elegant way on a national scale. Her record speaks for itself. She is an extraordinary woman and her dedication, hard work, competitiveness and adaptability were all key to her success."