As a senior he helped his HBU team to a fifth-place finish in the 1987 NCAA Championship. Montgomerie was the TAAC Player of the Year and Championship individual medalist in 1985 while setting the conference tournament record that season with an 11-under 205, which still ranks third today. He was a two-time All-American (1986, 87) and is one of 27 ASUN men’s golfers to finish in the top-three in the conference Championship three times. He was a three-time All-Conference selection and was a member of the first HBU Sports Hall of Honor class in 1997.

A native of Glasgow, Scotland, Montgomerie has recorded 51 professional victories and ranks fourth all-time on the European Tour with 31 wins. He is an eight-time Order of Merit winner as the European Tour’s top golfer, including a phenomenal seven-straight times from 1993-1999. He was the Sir Henry Cotton Rookie of the Year in 1988 and was named European Tour Player of the Year four times (1995, 1996, 1997 and 1999).

Montgomerie has also distinguished himself in Ryder Cup competition, captaining the Europeans to victory at the 2010 Ryder Cup along with earning recognition as one of the most accomplished players in the history of the event. As a member of eight Ryder Cup teams, he never lost a singles match, compiling an overall record of 20-9-7 and he ranks second all-time in individual points with 23.5.

As of Oct. 1, Montgomerie was ranked ninth in the Championship Tour’s Charles Schwab Cup rankings with one win and six Top-10 finishes. He is actively involved with The Elizabeth Montgomerie Foundation in memory of his mother who died of lung cancer. The EMF aims to raise money for cancer patients and their families. The Foundation has initially focused on funding the build of two Maggies Cancer Centres in Scotland, built in his mother’s name. He was also a 2013 World Golf Hall of Fame inductee. 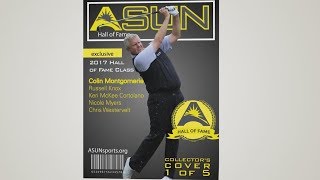