Joyce is the only head coach Florida Atlantic softball has had in its 21-year history. Under Joyce the program's accomplishments are unparalleled: eight-consecutive ASUN Championships (1997-2004)--9 in all (2006)--and eight straight NCAA Tournament appearances (1997-2004)--11 in all (2006, 2015, 2016). Created FAU's softball program from scratch, and the result was an impressive 33-18 record in year one. That earned Joyce her first A-Sun Coach of the Year award.

The building effort continued in 1996, as the team finished 37-32 and advanced to its second-straight A-Sun tournament. That year also saw Joyce take on the role of Senior Woman Administrator at FAU, a position she held until 2001. The record run of championships began in 1997 with not only the program's first conference championship, but FAU's first ASUN title in any sport. That success resulted in her second Coach of the Year award. In 1998, the team repeated as ASUN champions.

In 1999, the ASUN was given an automatic bid to the NCAA postseason tournament for the conference champion. The Owls won their third straight ASUN Championship and appeared in the NCAA Tournament for the first time. FAU posted a 49-20 record, good enough to earn Joyce another ASUN Coach of the Year award and her entire staff the Southeast Region Coaching Staff of the Year award by the National Fastpitch Coaches Association. In 2000, FAU would win its fourth-consecutive ASUN title and return to the NCAA Tournament. The season also featured an 18-game winning streak and another Coach of the Year award.

The 2001 season ended with similar results, an ASUN title and a trip to the NCAA Tournament while finishing with a 46-21. In all, Joyce has coached 25 First-Team All-Conference selections and 27 Second-Team honorees. In 2002 FAU set a team record and led the nation with 62 wins. It resulted in Joyce's fifth ASUN Coach of the Year award. It was also in 2002 that FAU received its first no. 1 seed, one of eight in the nation, for an NCAA Regional. In 2003 FAU won 31 of its last 41 games en route to the same postseason success.

From 2003 to 2004, FAU's schedule was one of the toughest in the nation as the Owls faced at least three teams that went on to the Women's College World Series. FAU's defense of its 2003 ASUN title was not an easy one, as it took a dramatic doubleheader sweep of UCF in the regular-season finale to clinch the top seed for the A-Sun Championships. In 2006 FAU captured its ninth conference crown in 10 years during its final ASUN campaign, and returned to the NCAA Tournament where the Owls advanced to the regional finals, picking up a pair of shutout victories over the University of Florida.

FAU was undoubtedly one of the best programs during its time in the A-Sun Conference, claiming more championships (nine) than any program in the history of the A-Sun. As one the best softball pitchers of all time, Joyce has built the FAU program on the foundation of strong pitching. She helped sculpt the career of ASUN Hall of Famer Nikki Myers, who finished her four-year run in 2002. Myers twice received Second-Team All-America honors and finished her career third in NCAA history in strikeouts. Joyce coached four ASUN Players of the Year, with Myers receiving the honor three times and Alana Klaus being recognized in the inaugural 1995 campaign. She has also coached an ASUN Pitcher of the Year in Candice Freel and twice, the conference Freshman of the Year.

Outside FAU, Joyce has been involved both as a coach and as a player at the highest levels of softball. Her coaching experience includes a four-year stint in the women's professional softball ranks, winning the World Series in each of those seasons. She has also coached and played softball with many of the nation's top collegiate coaches. A member of the National Amateur Softball Hall of Fame, Joyce holds a career pitching record of 753 wins and 42 losses. Included in her totals are 150 no-hit, no-run games and 50 perfect games. At the plate she posted a career batting average of .324. Joyce counts striking out Ted Williams in 1961 as one of her most notable achievements. Joyce's duties at FAU have not been limited to softball and administration. From 1996-2014 she was head coach of the women's golf team. 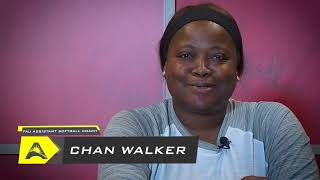