One of the most highly celebrated student-athletes in Mercer University history, Sam Mitchell dominated the court in the early days of ASUN basketball.

Mitchell starred for the Mercer men's basketball team from 1981-85, leaving an everlasting mark on the Bears' program. His 1,986 career points rank second in school history and he owns the school's single-season scoring record of 774 points (1984-85). Mitchell was the ASUN Player of the Year in 1985 after leading the Bears to the conference championship that season and an NCAA Tournament appearance. Mitchell also holds school records for most field goals made in a career (768); field goals made in a season (294); free throws made in a season (186); and free throws attempted in a season (248). Mitchell still ranks second all-time in the ASUN single-season record books for scoring average (25.0) and field goals made (294).

A native of Columbus, Ga., the 6-6 Mitchell was a third-round draft pick by the Houston Rockets. He began playing professionally in the Continental Basketball Association with the Rapid City Thrillers where he played three seasons before spending two years playing overseas on France. His NBA career began in 1989 as a free agent with the expansion Minnesota Timberwolves, where he played three seasons before being picked up by the Indiana Pacers. He returned to the Timberwolves in 1995, where he is credited with helping develop the career of rookie sensation Kevin Garnett. During his NBA career, Mitchell appeared in 994 regular season games and 59 postseason contests. He averaged 8.7 points, 3.7 rebounds, and 1.1 assists. He ranks second all-time in Timberwolves history behind only Garnett in games played with 757 and second with 7,161 points, 1,773 free throws made, 2,664 field goals made, 3,030 rebounds and 449 steals.

Following his playing days, Mitchell embarked on a successful coaching career in the NBA, serving as an assistant with the Milwaukee Bucks, Charlotte Hornets, and New Jersey Nets. He became the sixth head coach of the Toronto Raptors in 2005 and served in that role until 2008. Mitchell was chosen the 2006-07 NBA Coach of the Year after leading Toronto to its first-ever Atlantic Division title and a franchise-tying record 47 wins.

Mitchell was inducted into the Georgia Sports Hall of Fame in 2010. While serving as an assistant on the Timberwolves staff, he was named interim head coach in 2011 after head coach Flip Saunders was sidelined with an illness. Mitchell, who is extremely active in charitable initiatives, particularly the Special Olympics, recently joined Penny Hardaway’s staff as Associate Head Coach while also serving as the Head Coach of the U.S. Virgin Islands National Basketball Team.

Mitchell becomes the third representative from Mercer selected to the ASUN Hall of Fame, joining inaugural class inductee Andrea Congreaves (2015) and his college head coach and former ASUN Commissioner Bill Bibb (2016). The Bears were original charter members of the ASUN in 1978, when the league was known as the Trans America Athletic Conference. 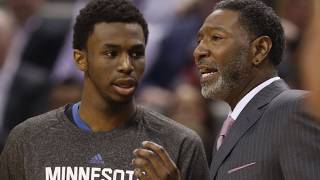